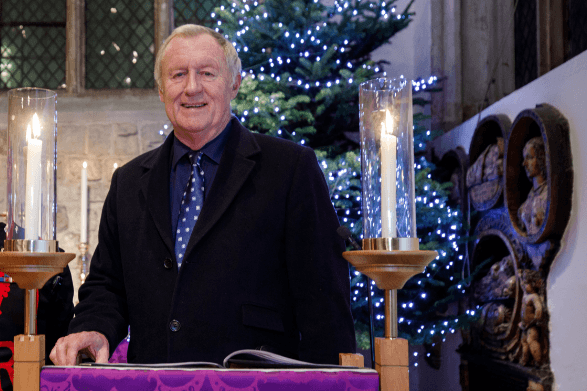 Held at the conic St-Martin-In-The-Fields church, in London’s Trafalgar Square, the carol service is always a popular and important event with charity supporters, friends and service users.

The service features readings to help contemplate the Christian story and birth of Christ, popular carols and stunning performances from a talented team of musicians. Proceeds from the evening go towards Livability’s work in supporting disabled people and vulnerable people.

For full information and to purchase tickets for the evening, visit the Christmas Carol service event page.

Guests and performers at this year’s service

Pam Rhodes is an English television presenter best known for presenting the BBC television long-running religious series Songs of Praise. She is a popular host of Livability’s carol service.

The Reverend Canon Roger Royle was ordained in the Church of England in 1962 and served his first curacy in Portsea, Portsmouth. During his career he served as Conduct and Senior Chaplain of Eton College. After leaving Eton in 1979 he became a non-stipendiary priest in the Diocese of Southwark.

On radio, Chris presented his number one Breakfast Show on 95.8 Capital FM for 17 years. He regularly attracted a weekly audience of over two million listeners – a million more than any other breakfast radio DJ! He won numerous awards and accolades along the way, including the Radio Academy’s ‘Outstanding Contribution to Music Radio’ award. He hung up his headphones for the last time in 2004. On TV, Chris is best known for hosting the award-winning quiz show ‘Who Wants To Be A Millionaire?’ which finished at the end of 2013, after enjoying phenomenal success worldwide for 15 years

Canticum – conducted by Music Director Mark Forkgen – is one of the most musically versatile chamber choirs in the country. Now in its 26th season, it has been praised for accomplished performances of major works and for exploring contemporary repertoire. The choir has also commissioned new writing and gives regular first performances.

Mary has sung principle roles with major opera houses and festivals in the UK and internationally including ROH, ENO, Glyndebourne, Opera North, Bayerische Staatsopera, Opera de Lyon at Opera Comique Paris and Bregenz. Roles include the lead in La Bohème and Madama Butterfly. She has premièred important new works and operas including two roles and two choral pieces for Jonathan Dove. She has also worked with the major UK orchestras, including recordings with Chandos Records and Deutsche grammophon, Channel4 and the BBC.

Alison has sung operatic roles for Glyndebourne Festival Opera, Glyndebourne Touring Opera, English National Opera, English Touring Opera, Aldeburgh Festival, Holland Park Festival, and the Chelsea Opera Group. Her concert engagements are extensive and have included the Russian Premiere of Sir Michael Tippett’s “A Child of Our Time” with the St Petersburg Philharmonic, Mozart’s “Requiem” with The Philharmonia, Handel’s “Messiah” in Madrid with the ECO and in Singapore with the Singapore Symphony Orchestra.

Hong Kong born clarinettist David Wong first took up the instrument at 13 but it wasn’t until 18, he had his first clarinet teacher. Despite the comparatively late start, he embarked upon a professional career his early 20’s as a soloist, chamber musician and orchestral player, giving concerts around Asia and Europe.

About the venue: St Martin-in-the-Fields

St Martin-in-the-Fields is a vibrant church located in the heart of Trafalgar Square. Dating back to 1222, its ethos of welcome, care, inclusivity and taking a stand on social issues continues to this day. With over twenty services a week, a regular concert series and education programme, St Martin’s extends its ministry through its worship, the Café in the Crypt and its welcome and support for those who are vulnerable and homeless in London.

For full information and to purchase tickets for the evening, visit the Christmas Carol service event page.