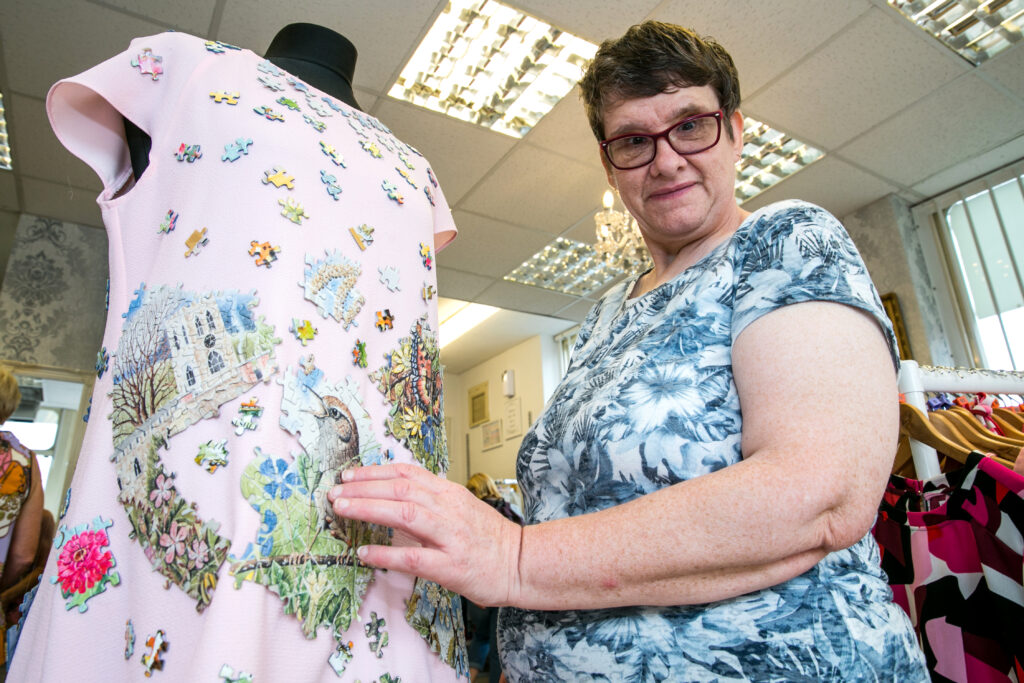 Walk down Horbury High Street last summer and you may have spotted a showstopper of a dress in a charity shop window. The sheath dress, in a pale pink, is decorated with vintage-inspired scenes from nature – made out of jigsaws. It’s the kind of item you might spot on a fashionista’s blog, with a whopping price tag.

But this dress represents a journey that has brought different people together from across a Yorkshire community, to create something beautiful that is more than fashion. Dynamic Horbury charity shop manager Tracie was struck by the idea of creating an eye-catching summer window display with an extra-special dress. She put out a call on local social media groups for anyone who could help by completing jigsaws, so she could experiment with embellishing garments.

Livability York House manager Helen Holt saw the ad and knew she had the right person in mind. Cue Pat, who lives at York House, which is home to 20 disabled adults. Pat is an avid jigsaw do-er and when asked, said she would love to help.

Being enabled to take part is another stage in Pat’s journey towards increasing independence, supported by Livability. When Pat arrived at York House several years ago, she was a wheelchair user who had been told her mobility would not improve. York House staff would not settle for this and were convinced Pat could gain considerable mobility and independence if given the chance.

After physical therapy, Pat’s mobility increased to the point where she no longer uses a wheelchair, travels on her own, sorts out her own medication and is an enthusiastic member of the local community. The jigsaw project tapped into a strong artistic vocation in Pat, who loves to draw and is particularly talented at copying artworks.

Keen to be involved with the fashion project, Pat popped over to Horbury, picked up the jigsaws from the Wakefield Hospice shop and returned them completed to Tracie. A few weeks later, Pat visited the shop to see the finished product – and was staggered by how beautiful the dress looked. ‘I’ve never known anyone to make a jigsaw dress!’ Pat commented. ‘It’s really satisfying to help.’

So pleased is Tracie with the result that she plans to auction the jigsaw dress to raise funds for the hospice, and to work on further artistic projects, assisted by Pat and others in the community, later in the year.