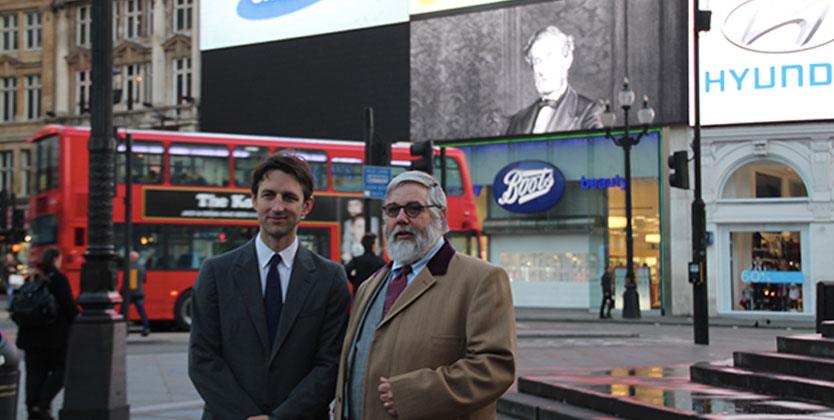 Today marks the 130th anniversary of the death of philanthropist and forefather to Livability, Anthony Ashley Cooper – the 7th Earl of Shaftesbury.

Livability staff and special guests attended the important memorial anniversary for the social reformer which was hosted by the 12th Earl of Shaftesbury Nick Ashley Cooper, who announced plans for an annual Shaftesbury Day.

The annual day of celebration will be about building on Shaftesbury’s legacy and bringing together charities, organisations and individuals that have a direct link with his work.

On the 130th anniversary of his death, an image of the philanthropic 7th Earl of Shaftesbury was projected on to the giant screens overlooking Piccadilly Circus – next to Anteros ‘The Angel of Christian Charity’ – as event guests and dignitaries gathered to mark the moment.

The memorial to the 7th Earl of Shaftesbury and all he stood for is one of the most famous in the world, Alfred Gilbert’s Anteros, ‘The Angel of Christian Charity’ – commonly known as ‘Eros’.

‘I am delighted to add my support as many gather to celebrate the 130th Memorial Anniversary of Anthony Ashley-Cooper, 7th Earl of Shaftesbury. The 7th Earl put his Christian faith into action, living out the Gospel that is ‘good news to the poor’ and using his seat in Parliament to radically improve working conditions for the poor and vulnerable, and to establish schools for some of the most marginalised children in our country. His courageous legacy continues to inspire people across our society today.

‘As the President of Livability I am particularly pleased to see how the passion, commitment and determination of the 7th Earl remains tangible in our work with many on the margins of society today. May we all continue to speak out against the injustices and inequalities around us today as we honour the 7th Earl and give thanks for this good and faithful servant of God.’

‘The Angel of Christian Charity’ memorial in honour of Lord Shaftesbury in Piccadilly Circus, London

‘On this 130th anniversary we remember the 7th Earl of Shaftesbury and the important contribution he made to this country, standing by his memorial statue in Piccadilly Circus. An iconic landmark for London and a history all Londoners can be proud of’, said Nick Ashley-Cooper.

‘He dedicated his life to the welfare of children and the disadvantaged in our society leaving a legacy that can still be felt today and that’s a great inspiration for us all to follow.’

He also founded the ‘Ragged school Union’ a charitable organization dedicated to the free education for destitute children. In 1944 the Union adopted the name ‘Shaftesbury Society’ which merged with charity John Grooms in 2007 to become Livability.

‘We are immensely privileged to take part in this special Shaftesbury Day memorial celebration. Livability is inspired by the legacy of Lord Shaftesbury and we are very proud of our 160-year heritage of social reform and community inclusion. We are passionate about continuing the commitment Lord Shaftesbury had to working for people facing a wide range of disabling barriers in their day and making community more livable.’

Dr Nicola Stacey is the Director of the Heritage of London Trust which restores historic monuments across London. She said:

‘London is full of wonderful monuments to selfless people. The Shaftesbury fountain is one of the most iconic but they’re everywhere. People hardly notice them and they often quietly fall apart. This a great opportunity to remember that the city was built on Victorian philanthropy.’

Donate
News
Blog
Find a service near you

Donate
News
Blog
Find a service near you