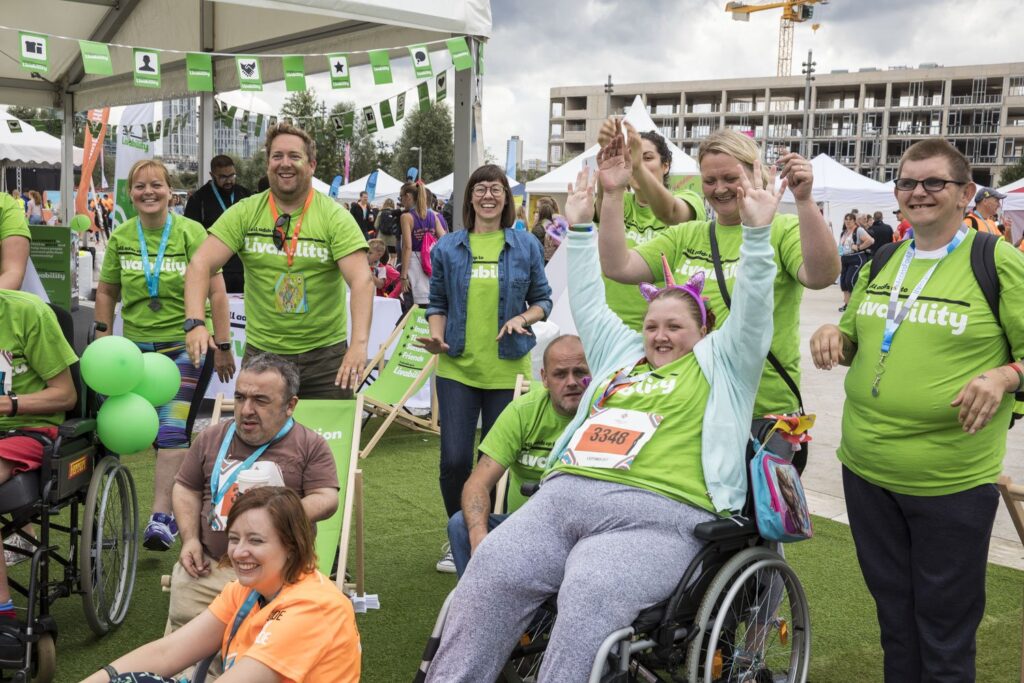 ‘Parallel is about bringing everyone together and having a can-do attitude. We shared our experience together and celebrated who we are as people. I saw people I work with independently achieving something which is out of this world.’ So says Chris Hearne-Sirman, specialist social worker with Livability Icanho, a rehabilitation centre for those with acquired brain injury. Chris’ experience with families affected by the brain injury of a loved one made him determined to bring clients and colleagues to Parallel 2017.

Parallel is an all inclusive run/push event held in the Queen Elizabeth Olympic Park. Held in September, Livability was the platinum charity partner at the event and many of the people that use Livability’s services took part on the day.

The inclusive spirit of the event has a huge impact, Chris finds. ‘If you have an acquired brain injury, all of a sudden life changes and it can be one hell of a shock. You can feel marginalised, on the outside of your community and it can put a huge strain on your family and social networks. Often you can’t work or join in the things you used to enjoy.’

Seeing others take part is inspiring: ‘Parallel shows that your disability is not a barrier to you taking part. I tell clients that some of the strongest people I know are the people I see doing the 100m at Parallel. It’s celebrating your achievement and knowing you are not alone.’

Ashley – a visitor to the Icanho rehabilitation service, who has been a wheelchair user for six months and is working towards gaining mobility, made the courageous decision to take part in the 100 m, supported by Chris and her family. It was a hugely significant achievement for her: ‘I felt over the moon that I did it as it was the first time I had managed to walk that far since my brain injury. I never believed I could do it and I’m so happy I did!’ says Ashley.

Chris, who had encouraged Ashley to come to Parallel, was thrilled and impressed with what she achieved. ‘Ashley’s disability has meant she has really had to work at accessing activities which used to be central to her life. She is powering through very hard. She was chuffed to bits and so was I.’

For Ashley, it was a turning point away from isolation: ‘I have felt lonely because of my wheelchair, but with taking part at Parallel, I felt connected and the same as everyone else.’

Paul – a former visitor to the Icanho service came along with Chris to run the 10 k at Parallel. Paul worked through a debilitating stroke to regain his passion for running, and said the commitment and effort put in by those he saw taking part in the 100 m gave him strength for the final, difficult kilometres of his own run. ‘It’s not about the time, it’s about finishing,’ says Paul.

For Chris, Livability’s driving passion to enable people to connect with the people, activities and communities they love ‘is why I work for the charity – it’s why I’ve dedicated my life to supporting people like Ashley and Paul. And what happens at Parallel is a very real example of that in action.’