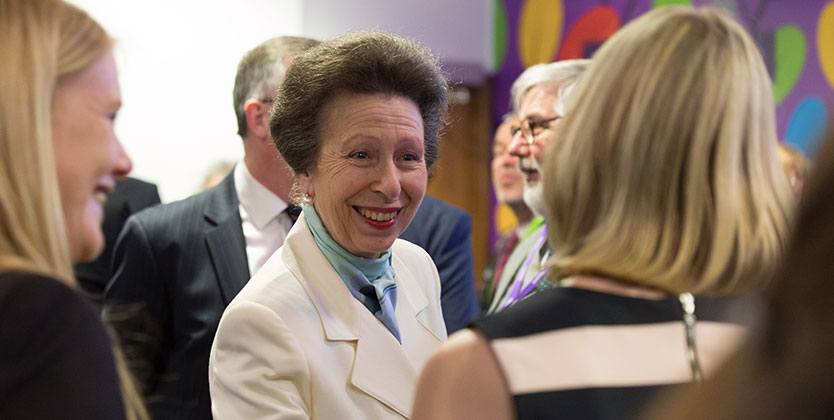 Livability holds the ceremony every year to mark and celebrate the special achievements of staff, supporters and volunteers. Nominated by their peers, the winners are recognised as being people that go the extra mile in their work and service.

The Princess Royal Livability Awards was also an opportunity to mark the achievements of other members of the Livability community. Around 40 people were nominated to win Trustee Awards for their work, and certificates from the charity’s board of trustees will be awarded in the weeks to come. Each winner was celebrated on a special ‘heroes’ board that was displayed during the evening.

Livability CEO, Dave Webber expressed his pride in the way Livability staff work to support their service users.
[x_blockquote cite=”Dave Webber, CEO ” type=”left”]As a national charity, Livability has over 1600 members of staff, delivering disability and community focused services around the UK. Along with key supporters and volunteers, they make an immense contribution to our charity’s work and the impact on the lives of our service users. I am proud of the commitment our staff and special supporters share in creating a positive, inclusive and enabling community experience for all we serve.[/x_blockquote]

HRH The Princess Royal also unveiled a plaque to mark the official opening of Livability’s new national office. LIvability recently moved their national office team to the Greenwich Peninsula, after 20 years in their former location of Shoreditch. Livability placed disability accessibility and design as a major priority for the relocation project and chose the North Greenwich area for the step free benefits of the site. Engaging a specialist DDA (Disability Discrimination Act) consultant and Morgan Lovell – the UK’s leading office interior design, fit out and refurbishment specialist – the charity tasked the building team to create a working space optimised for collaboration, inclusion and accessibility.

Jess Long, a Service User Engagement Officer at Livability spoke to the event attendees about her role and shared her reflections on the new office and it’s accessibility provision.

[x_blockquote cite=”Jess Long, Service User Engagement Officer” type=”left”]It’s great to be at the official opening of our national office tonight. As a person with a physical disability I am delighted by the new office space. It’s accessibility, slick design and open nature are just a delight to come to and to work in. Since acquiring my disability, I have noticed that there normally appears to have to be a choice made between a building being either aesthetically pleasing – or accessible. However, bucking the trend, Livability have put accessibility at the heart of its design brief and it’s got beautiful results.[/x_blockquote]

Dave Webber, Livability CEO took HRH The Princess Royal for a tour around the national office premises. HRH spent time speaking to Livability service users, staff, volunteers and supporters, asking them about their lives and involvement with the charity.

[x_blockquote cite=”Councillor Norman Adams, The Mayor of Royal Greenwich” type=”left”]It is a privilege to have welcomed HRH The Princess Royal to the visit the Royal Borough of Greenwich and participate in Livability’s charity event for which she is patron. I am delighted that the Greenwich Peninsula has been a location of choice for Livability’s national office team and that the step-free accessibility of the area is beneficial to the charity’s service users and staff.[/x_blockquote]

Livability extend their thanks to Her Royal Highness The Princess Royal for her support and for presenting these Awards.

Watch what it took to create a fully accessible national office: