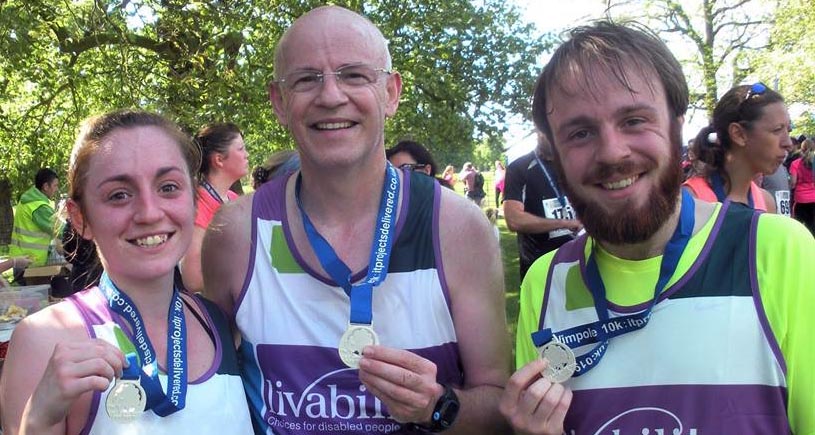 It takes tremendous courage to revisit the place that caused a traumatic experience. In 2016 David Swales suffered a stroke after running a 10km race. With help from Livability Icanho – a specialist rehabilitation centre for adults after an acquired brain injury or stroke – David was able to run another 10km event one year later. We asked David what his motivation was to take on the challenge after his rehabilitation.

Where did you discover your love of running?

I began running in February 2015 with a view to living a healthier lifestyle. I was never unhealthy but as I am a type 2 diabetic I wanted a way to help control my sugar levels.

I am very goal focused, so I set myself the target of running the North Wales Half marathon. With this target I began to run more and more. It can become quite addictive. I also started doing parkrun which again was a great encouragement to me.

How did you become involved with Livability?

On 17 April 2016 I ran a 10km race at Ickworth Park. In a successful attempt to get under a one hour finish time I sprinted up the final hill. Unfortunately, as a result of this overexertion I had a stroke that has changed my life. Whilst the stroke happened after this run it wasn’t the underlying cause. I still haven’t had a diagnosed reason for my stroke and I continue to have tests to find this out.

David (middle) suffered a stroke after completing a 10km race in 2016.

I was fortunate to be referred to Livability Icanho in Stowmarket – a specialist rehabilitation centre that supports adults that have suffered brain injury or stroke.

How did the stroke you suffered affect your life?

I have now permanently lost 40% of my eyesight. I also suffer from aphasia (problems with speaking) and cognitive problems.

Every day life throws new challenges and facing them can be difficult.

What did your rehabilitation at Livability Icanho involve?

I have attended Livability Icanho for over six months. Within this time I have undergone several types of rehabilitation.

What support did you receive from family, friends and your community?

I am very fortunate to have a wonderful family – my wife, children and wider family have always supported me incredibly well in what was a very difficult time for me.

There are many things I can no longer do like driving. The wider community has often helped by driving me to appointments, taking me out for coffee for a change of scenery and doing odd jobs around the house.

You recently ran a 10km race one year on from suffering a stroke. What motivated you to participate?

I wanted to say thank you to Livability Icanho and to help their staff and future patients, so I decided to fundraise for them. I wanted to run the same race I did just before I had my stroke. Unfortunately that same race is not happening so I ran the Hoohah Wimpole Hall 10km race.

Running for me now has a different outlook and although the likelihood of me having another stroke is lower, I still have the worry that it might happen again. So although it’s not a long race, for me it is a real challenge.

I have been fortunate that I have great family support – my daughter Bethany and my son Ben ran with me.

David’s daughter Bethany and my son Ben ran 10km with him one year after suffering a stroke.

My wider community have been great in supporting my fundraising efforts – I have already raised £1,800 with a few more promises of sponsorship to come.

I wasn’t able to run much after my stroke but I eventually started to run again. Running for me is both an enjoyable and worrying as it has great health benefits. There is always the fear of another stroke but running is part of the strength I need to make sure that the stroke I had doesn’t win.

How did you feel after completing the race?

Apart from exhausted, I felt exhilarated!

As a result of my partial sight I couldn’t see where my feet were landing on the tough terrain. For this reason I have to concentrate, causing neurofatigue. During the run my daughter was concerned but I managed to convince her I was okay.

At the end of the race I was totally exhausted and on my last legs. Once I had recovered slightly I was able to appreciate that I had achieved what I wanted to and that felt amazing. I was proud of my children for running with me and supporting my fundraising. It was definitely one of the better moments since my stroke.

Is there anything you would like to say to someone who is at the start of their rehabilitation?

I think the thing I would tell everyone at the start of the rehabilitation is never stop trying to get better and to celebrate every success you have no matter how small. Recovery is a long and slow road, but it will get better.

You can still support David by donating on his fundraising page here.

Are you passionate about tackling barriers in people’s lives and working for more inclusive communities?

If so, join in and support Livability by taking up one of our FREE charity places at Parallel London – the fully inclusive fun push/run at the Queen Elizabeth Olympic Park.