What it was like to run my first London Marathon 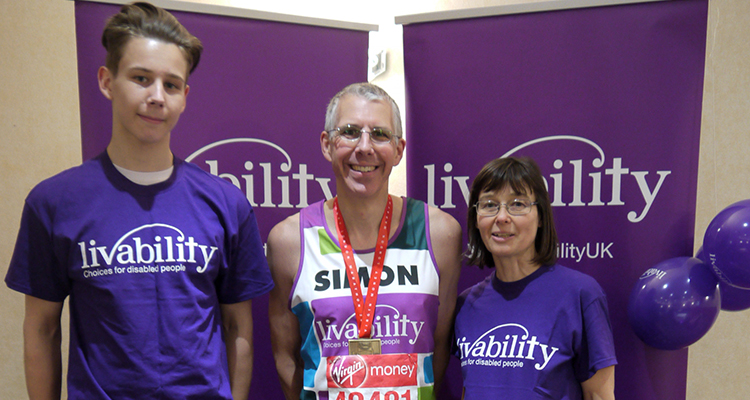 Simon Blanchflower completed his first London Marathon in an impressive time of 03:25:02

Spectators of the London Marathon get only a small glimpse of what it takes to complete the  challenging 26.2 mile route through the capital. Team Livability runner Simon Blanchflower completed his very first London Marathon this year in an impressive 03:25:02. In his own words Simon describes what it was like for him leading up to, during and after the marathon.

After an early start to race day I travelled over to Greenwich with my good friend Greg who was also competing today. It was good to have someone to chat to during the journey there as it helped to take my mind off the race preparation for a while.

Thanks to Transport for London and Southeastern marathon runners enjoyed free travel and  smiling staff were on hand to get us to Greenwich. The trains were running on time too!

Preparing for the start

We arrived at Greenwich in good time and enjoyed a leisurely walk up to the start area. After the obligatory trips to the toilet, a last minute banana to boost energy and handing in our kit bags to a super efficient baggage service – we made our way to our start pens.

Greg headed to starting pen 1 – he was targeting a sub-3 hour race time – and I went into pen 4 for the runners aiming for 3:30 race time. I managed to position myself at the front of the pen and spent an enjoyable 30 mins or so chatting to fellow athletes.

Shortly before 10am the park gates opened and the hooter went for the start of the race. We waited for a few minutes until we broke into a walk, then a jog and finally a run as I passed over the start line just under 5 minutes after the first runners had left.

The first km was a little slow as we sorted ourselves out and an amazing number of athletes chose to take a loo stop just in the first 800 metres. But before long I was into a good running rhythm and starting to knock off the miles in just over 7.5 mins.

6 miles into the marathon

The crowds started to build and I was so glad that I had my name on my vest because people were shouting out my name to encourage me. There was great support all the way along the route, but the crowds at Cutty Sark were especially vocal. At around the 9 mile mark I saw my loved ones Jackie and Joel, which gave me a real boost. About a mile later I saw a work colleague which was another boost.

12 miles into the marathon

Crossing Tower Bridge – what an atmosphere – you could hardly hear yourself think with the amount of people their cheering you on. I was still making good time and the hydration and nutrition (gels) were really helping. I hit the half marathon mark in about 1:41 and still feeling relatively fresh. Just before then we passed the elite men athletes who by this stage were heading in the other direction towards West London – it was great to be aware that we were in the same race as them even if at this stage they were 7 or 8 miles ahead of us!

17 miles into the marathon

Going into docklands the crowds thinned a bit but there was still good encouragement. I knew that there would be a real lift for me at the 17 mile mark where Livability had their cheering point. I was also hoping Jackie and Joel would have made it there in time to see me again.

I wasn’t disappointed – I was their first runner through so everyone was excited to see me and it pushed me on towards Canary Wharf. The level of support along the course started to grow again, which was really important as I was now going to enter the zone where I knew it would start to hurt.

While I was operating well within my cardio-vascular capacity, I could feel my leg muscles starting to get weary and needed to make sure that I maintained a good running style to mitigate this as far as possible. I had run 22 miles in training so knew that this was well within my compass, but wasn’t sure how much the last 4 miles would hurt.

21 miles into the marathon

As I headed back through Limehouse and Wapping towards West London I could see the runners who are behind me still heading out to docklands – you have comfort in knowing that you only have 4 or so miles to go! I was starting to slow a little but still managing to generally hit 4:50 mins per km so I knew that if I held it together I could manage a time a few minutes below 3:30.

23 miles into the marathon

It was as I was passing the Tower of London again that the real race kicked in as I had to draw on both my physical and psychological reserves – it is as much in the head as in the body at this stage. My plan at this stage was to keep a good running gait, think positively, draw inspiration from the memories of a few people and running as close to the crowd as possible to get them shouting my name.

It is also around this point that some of the athletes around you start pulling up with cramp or, in the worst case, collapsing into the arms of the amazing medical crews. This too starts to play mind games with you as to whether your body will hold true. Thankfully mine did and I was still managing to run under 5 min per km.

Approaching Westminster I saw Jackie and Joel again which was a vital boost to push me into the last 10 mins of the course.

I was soon in Parliament Square and going down Birdcage Walk with the distance markers starting to proclaim 600m, then 400m and finally 200m to go. I took one last look at my watch and saw that with a strong finish I could be close to 3:25 so I lifted my body one last time to push for the end and crossed the line in 3:25:02.

Well within my 3:30 target, I walked – or more accurately hobbled – away satisfied and not feeling that I needed to do another marathon as I had achieved what I wanted to. After collecting my medal, having a finishers photo taken, receiving my goodie bag and reclaiming my kit bag I moved (very) slowly to Trafalgar Square to meet up with Jackie and Joel.

It was an amazing day. I would just like to say thank you to Livability, my family, supporters and sponsors again for your generosity, words of encouragement and general journey with me on this sporting endeavor. I will enjoy a rest this week and then it is back into training for another adventure.