Most of us have felt our wellbeing falter at some point during the past two years. If you have a disability, you are more likely to suffer from increased loneliness, poorer health and greater levels of anxiety than non-disabled people. At our independent living service in the North-East, people we support are boosting their wellbeing – with a themed pop-up restaurant. 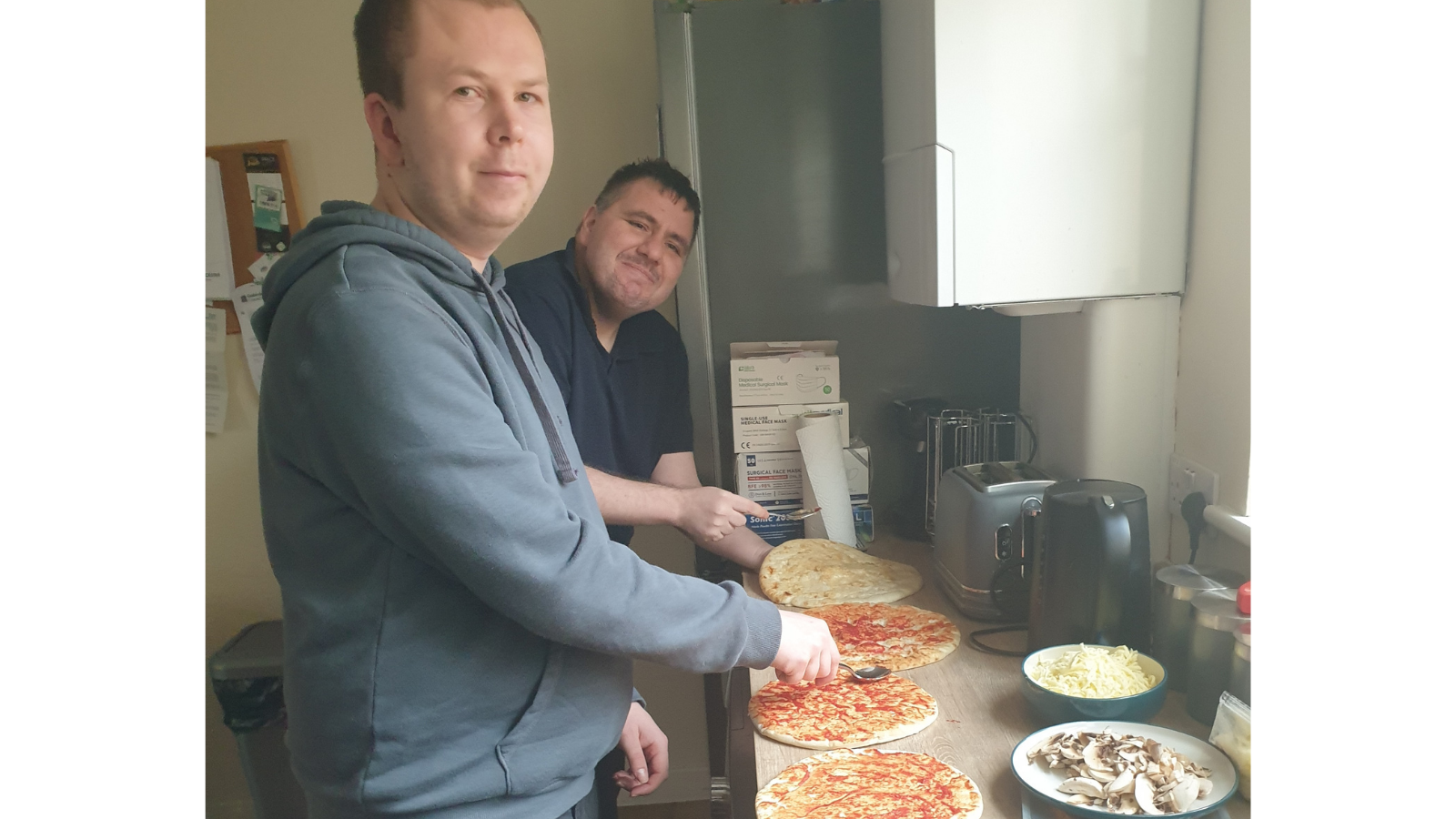 One of the ways Livability supports people with disabilities is through independent living services, like Ramsey Court near Gateshead, where we provide support for people living in their own flat. Eight people who live at Ramsey Court are supported by the charity and David’s flat is known as the party flat, says Service Delivery Lead, Melanie Peel. ‘Everyone congregates in David’s flat – he’s dead bubbly. When he goes out, everyone chats to him – he’s a real people person.

David and John, who also lives at Ramsey, are very close friends and they go for dinner in each other’s flats once a week. And then that idea grew into inviting other people along to a themed dinner night. So David put a sign on his door – Ramsey Restaurant!’

First off was a pizza night, and staff supported David to decorate his living room as an Italian restaurant; next up is an American evening, with homemade burgers. The group is already planning a special afternoon tea in June, to celebrate the Queen’s 70th jubilee. Everyone coming along chips in for the cost of the food, they take turns to host the dinner in their own flat, and staff support the host to plan the meal, work out the finances, do the shopping and cooking. 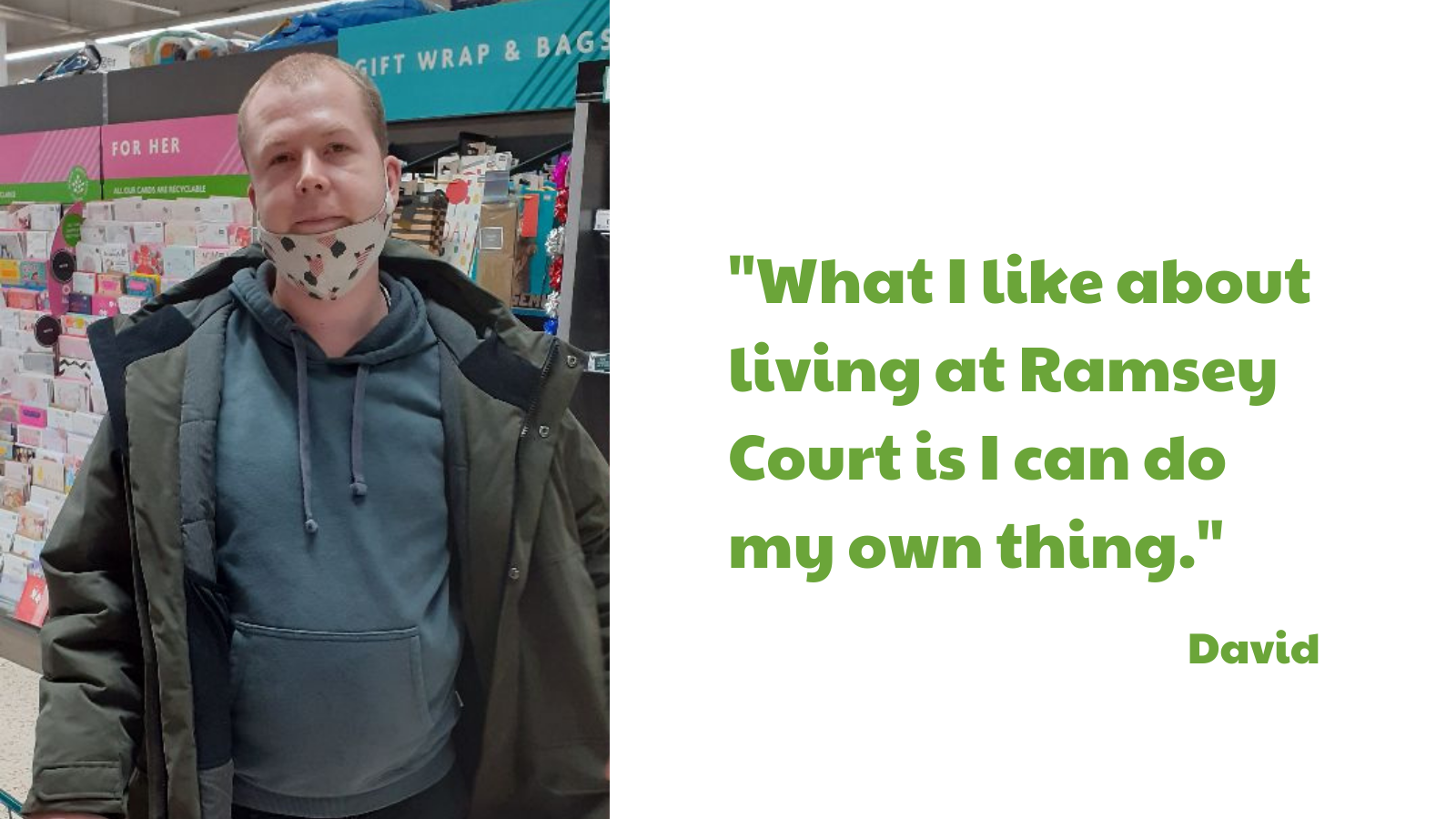 What difference does this make to people’s wellbeing?

‘Living independently like this means people get more one-to-one time with staff, which gives people greater scope to try new things, always knowing staff are there to support them,’ says Melanie, who has worked in social care for nearly 30 years. ‘We see how this builds confidence and improves people’s social skills, plus life-skills like budgeting and housework. When people here push themselves to do something like host a restaurant night, it gives them such a sense of satisfaction and wellbeing.’

‘What I like about living at Ramsey is I can do my own thing,’ says David, and with John, comments that ‘we like the Ramsey restaurant as we are able to cook different things and have fun whilst doing it’. John is also pleased that living independently means he’s learned to do the housework and look after his flat.

Adjusting with the pandemic

Staff have been working one-to-one with other Ramsey tenants, such as John, who spent nearly a year at home during the pandemic, and who has recently gone through a very successful phased return to living independently. John chose to return for three days a week initially, and since the New Year has decided to live full-time at Ramsey again. ‘Many of the activities that John enjoyed before the pandemic have closed and not yet reopened, so we’re supporting him to find new daytime activities,’ says Melanie. ‘John absolutely loves being outdoors so we’ve worked with him on an application form to be a countryside volunteer, picking litter and gardening, one day a week. He’s also keen on getting along to a local sports venue for people with learning disabilities, that offers football and rock-climbing.’

Melanie comments on how she sees John flourishing at Ramsey: ‘He’s doing absolutely brilliantly, so much so that when his mum offered to pick him up each weekend for a break at home, he said he’s happy here, he’s made good friends and he only wants to go home once a month.’

‘Our Ramsey service shows that people with disabilities can live very well in the community, with the right support,’ says Livability regional manager Vicki Sharpe. ‘As John and David show, people we support love to get involved, make friends and make a contribution to society. Independent living gives freedom and opportunity, and Livability’s support and values means people can flourish.’

*Coronavirus and the social impacts on disabled people in Great Britain: February 2021

About us
Services
Ethos and values 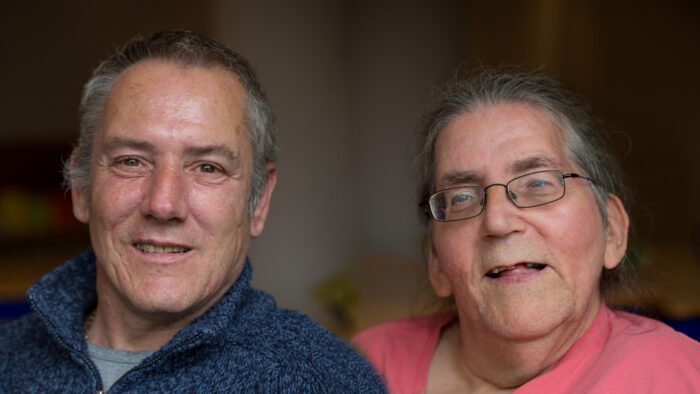 About us
Services
Ethos and values