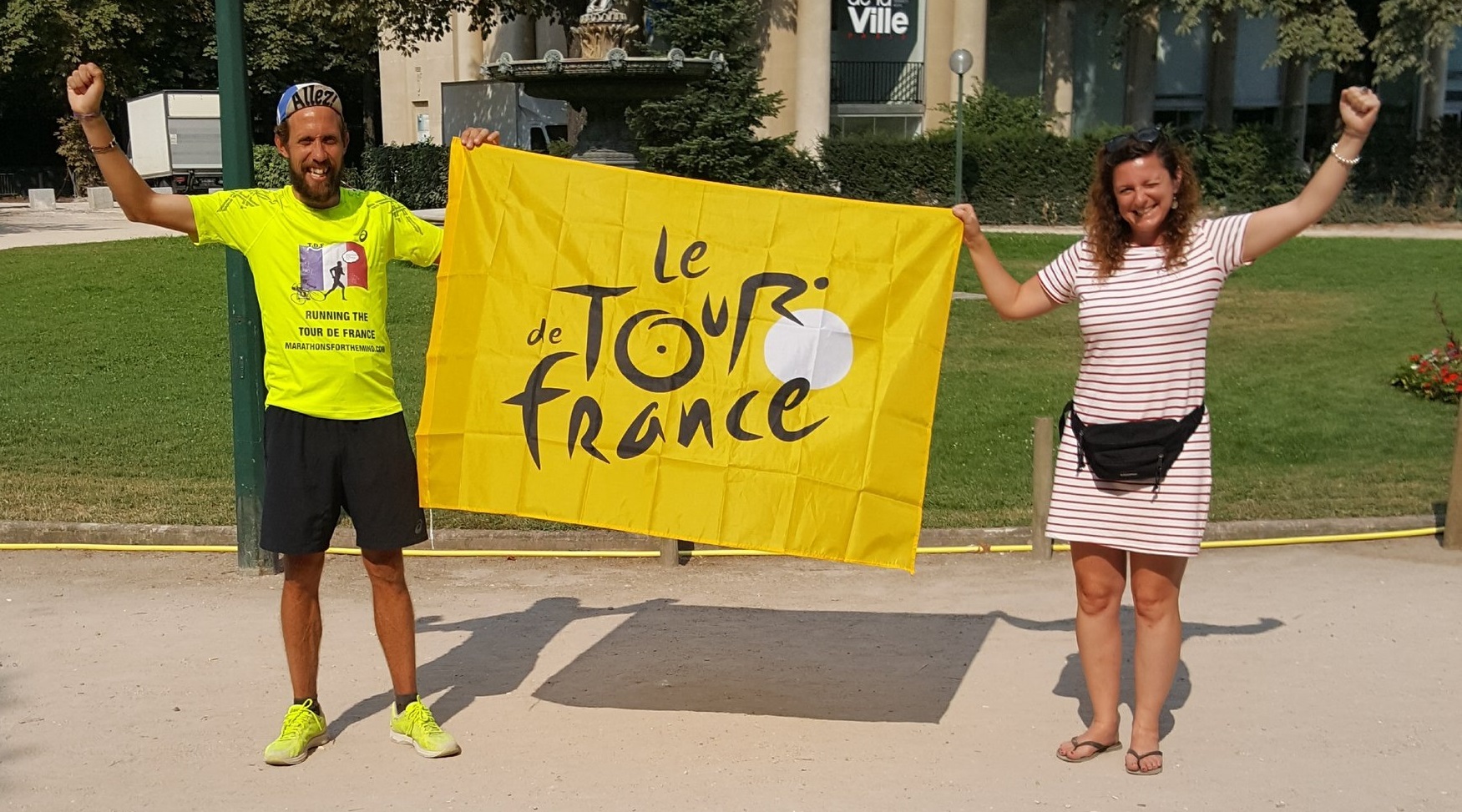 He did what felt impossible to many of us, but with Pete’s determination and grit, he made it to the finish line before the cyclists, who are currently on Stage 17, the  Bagnères-de-Luchon / Saint-Lary-Soulan Col du Portet Mountain stage comprising of 65km. Pete’s certainly showed the cyclists how it’s done.

Setting off on the 19th May, Pete’s run an ultra-marathon each day. Today his huge challenge ended and after 68 gruelling days, unbelievably, he completes the challenge ahead of schedule.

“We are in Paris, central Paris this time, I’ve just completed 61kms today, about 37 miles, I’ve been on the road for overs 7 hours, it’s taken us to the point where we have 56km to go, 8 laps of the circuit, we have the Champs-Élysées along here, you can see they’re setting up the grand stands which will be my finish line tomorrow, and the Arc de Tripmphe that way. And tomorrow, this is going to end and we will complete the challenge – this is going to happen.”

What has Pete achieved?

Pete’s completion of the Tour today means that he has spent the last 67 days (originally predicted to be 70), pounding the roads and mountains to complete the Tour De France route on foot. It’s a feat that’s seen him cover:

Setting off 7 weeks before the riders on May 19th 2018 Pete’s aim was to complete the 21 stages and over 3300 km route of the 2018 Tour De France before them. It involved running an Ultra marathon every day and climbing the equivalent of Mount Everest over 3 times.  And now he’s done it.

On the eve of Pete’s final day

“What it means to be so close….as you can probably imagine, it’s almost as difficult to have made it this far as it is to succinctly describe what it means to have done so. To be so close to a moment that I have only allowed myself to really contemplate over the last few days.

I mentioned in a previous post that ‘a challenge such as this is as much about the journey to get there as it is about the finish line’. That journey has been full of so much more emotion than a single moment can ever bring but that doesn’t mean it won’t mean a huge amount when it hopefully comes. I’m sure the focal point of that finish line might see a few tears or even that rare jump for joy. Like last time this challenge no longer feels like just mine (mine and Sallys this time). It feels like all of the yours too. Those who have followed, continued to send messages of support, often when I have been too tired to reply, and donated to the mental health cause at it’s heart. I also hope that the money raised will mean this journey doesn’t just end tomorrow. That it will grow and continue to make a difference long after my legs have stopped aching and my dodgy beard has been shaved off.”

What motivated Pete to run?

Peter has been raising money for both Livability and Mind, shining a light on mental health issues by taking on this challenge and fuelled by his personal experiences and the desire to make a difference. Peter’s running and choice to support Livability was inspired by Livability’s Flourish project at our wellbeing discovery centre Livability Holton Lee

Flourish – the project that inspired Pete a difference

The money that Pete raises for Livability is directed to support the work of Livability’s Flourish project – a horticultural therapy project for people living with mental illness.

Flourish is a gardening therapy programme for people living with mental health and disability. People learn new skills, build confidence, make new friends and have fun. People arrive at the centre with different needs, arising from mental health challenges and a wide range of disabilities – but feeling isolated is a common theme.

With 97% of people who attend Flourish reporting an increase in social networks and a decrease in social isolation, Livability’s Flourish project is a standout service with local referring agencies.

“Flourish’s culture of acceptance and building to people’s strengths is key. When people arrive, I can see in their face that first morning that they’re questioning where they will fit in. Then you can see it dawning on them that there is no need to ‘fit in’, no clique, because everyone fits in.

Everybody is open and welcoming to new people. They take an interest in them as a person – they talk about what TV they’ve watched, what football team they support. Conversations and friendships just start.”

How the money helps

Money raised by Pete will go towards a range of needs at Livabiity’s Flourish project. Here’s just some of the ways in which the money helps.

Read more about Peter, Livability Champion and how you can support him.