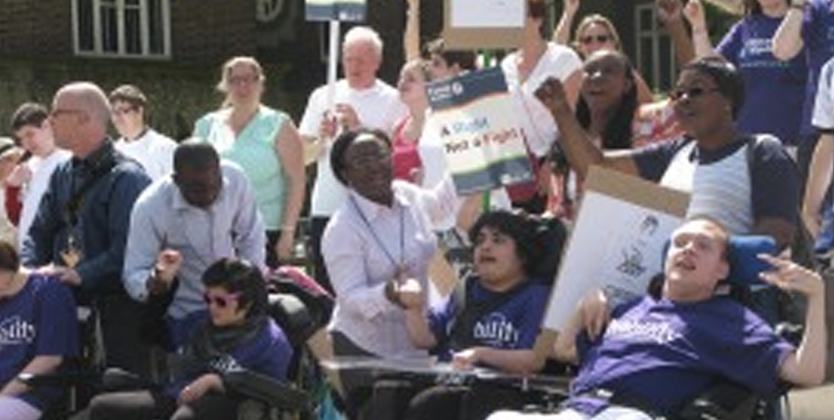 Students from Livability Nash College, Bromley, have added their support to the Natspec campaign (The Association of National Specialist Colleges) in calling for education equality for young people with learning difficulties or a disability.

Students from Nash College joined around 100 others from a variety of colleges, charities and campaign groups under the Natspec banner for a protest outside Old Palace Yard, opposite the Houses of Parliament, on 17th June 2014.

The ‘A Right not a Fight’ campaign, set up by Natspec and co-run by students from specialist colleges, calls for young people with a disability to have the right to choose an educational future which meets their needs, something which many others take for granted.Livability and Natspec believe that this journey is often a ‘fight’, rather than a ‘right’.

Principal of Nash College, Claire Howley-Mummery, said, ‘The students who attend Nash College are some of the most vulnerable and complex learners in our society. They are often dismissed with their learning outcomes and achievements; devalued and unsupported by those in power and commissioning roles.

‘These are the people who need maximum protection to ensure their right for ongoing quality education which will impact directly upon them in terms of the quality of the lives they live. This must be a right no fight.’

Nash College students wanted to show how important going to college is to them and how it helps them develop key skills. Sonny, student at Nash College, said, ‘It’s good to be at college, it makes me happy. I like cooking lunch, going to hydrotherapy and  making my own drinks”.  Jovon, another Nash College student, said he would be  ‘disappointed and upset’ if he could not attend college.

Watch a video of the event:

The event was also attended by Bob Stewart, MP for Beckenham, who offered his support to the students and listened to their concerns.

One of Natspec’s key aims is to assist the government in developing new legislation. Their concerns include the failure of local authorities to:

Alison Boulton, Chief Executive of Natspec, said, ‘Our work with specialist colleges has helped the government create legislation which supports young people to get a place at a day or residential course at a specialist college. However, recent funding reforms have put power into the hands of local authorities, who assess needs, commission and fund places in different ways, leading to a postcode lottery for specialist education.’

Natspec is the membership association for over 80 specialist colleges in England, Wales and Northern Ireland that provide high quality, tailored education and skills development courses for up to 3,500 students with a range of learning difficulties and/or disabilities.